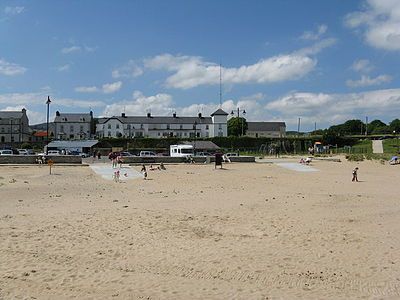 Rathmullan is a small seaside village on the Fanad Peninsula in County Donegal, Ireland. It is situated on the western shore of Lough Swilly, 11 km north-east of Ramelton and 12 km east of Milford. Rathmullan serves as an important historical village as it was the scene of the Flight of the Earls in 1607, a major turning point in Irish history.

There are also the ruins ol Carmelite Friary in Rathmullan which was built by Eoghan Rua MacSweeney in 1516. The Friary was sacked by the English garrison from Sligo in 1595. In 1607, Rathmullan was also said to have seen the last of the Gaelic Order, most notably the Clan Ó Néill and the Clan Ó Domhnaill, during the Flight of the Earls to the Continent. This 'flight' took place from Portnamurray on the southern edge of the town. In 1617 the Friary was occupied by the Protestant Bishop of Raphoe, The Rt. Rev. Dr. Andrew Knox. A subsequent Bishop of Raphoe turned it into a fortified house in anticipation of a possible French invasion during the Napoleonic Wars. This battery still stands and today serves as a heritage centre.