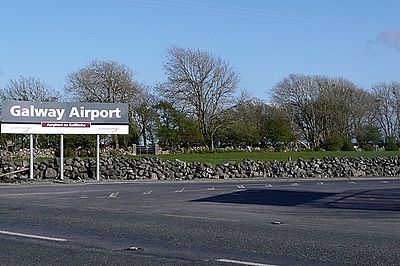 Galway Airport is located at Carnmore, 4 NM east of Galway City, County Galway, Ireland and is managed by Corrib Airport Limited. It has not serviced any scheduled passenger traffic since 31 October 2011, when Aer Arann ceased commercial operations at the airport. At 1289 m , the runway is too short to handle most jet airliners and so scheduled services were restricted to turboprop aircraft or small executive jets. In November 2013 it was announced that the airport's aviation licence would cease, closing the airport. In January 2015 it was announced that the airport would reopen for private and commercial flights, but as of December 2015 the airport was "closed for commercial traffic until further notice".
In 1918 a landing ground was built for the Royal Flying Corps at nearby Oranmore. It was later used by Aer Arann, a local flying club and private operators. However it remained a grass strip and was virtually unusable in Winter. Ernest Steiner, a German businessman built his own strip opposite his factory at Carnmore. Aer Arann moved in also and commenced operations from there in 1974.