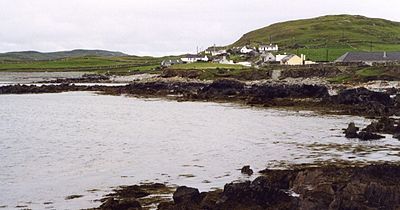 Inishbofin is a small island off the coast of Connemara, County Galway, Ireland. Inishbofin has around 180 inhabitants and is a popular tourist destination.

The island's English name Inishbofin is derived from the Irish name Inis Bó Finne . There are several legends concerning the origins of the island's name. According to one legend, the island was actually a floating place until some fishermen landed on it in a fog. By bringing fire onto the island, they dispelled the magic, fixing it in place. They then saw an old woman driving a white cow, which turned into a rock when the woman struck it with a stick.