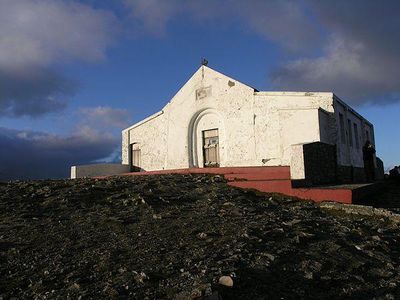 Croagh Patrick Patrick's Stack"), nicknamed the Reek, is a 764 m mountain and an important site of pilgrimage in Mayo, Ireland. It is 8 km from Westport, above the villages of Murrisk and Lecanvey. It is the fourth highest mountain in Mayo on the international P600 listing after Mweelrea, Nephin and Barrclashcame. It is climbed by pilgrims on Reek Sunday every year, which is the last Sunday in July. It forms the southern part of a U-shaped valley created by a glacier flowing into Clew Bay in the last Ice Age. Croagh Patrick is part of a longer east–west ridge; the lower westernmost peak is named Ben Goram.

Croagh Patrick comes from the Irish Cruach Phádraig meaning " Patrick's stack". It is known locally as "the Reek", a Hiberno-English word for a "rick" or "stack". In pagan times it was known as Cruachán Aigle or Cruach Aigle, being mentioned by that name in sources such as Cath Maige Tuired, Buile Shuibhne, The Metrical Dindshenchas, and the Annals of Ulster entry for the year 1113. Cruachán is simply a diminutive of cruach "stack", but it is not certain what Aigle means. It is either from the Latin loan aquila "eagle" or a person's name. In addition to its literal meaning, cruach in the pagan name may also have some connection with Crom Cruach.