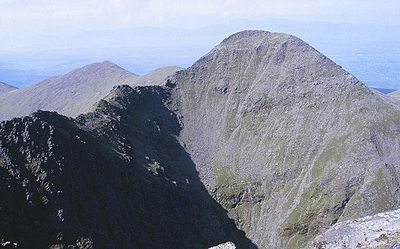 MacGillycuddy's Reeks is a mountain range in County Kerry, Ireland. Stretching slightly over 19 kilometres , it includes the highest peaks in Ireland and the only peaks on the island that are over 1,000 metres . The highest of these is Carrauntoohil at 1,038 m , followed by Beenkeragh at 1,010 m and Caher at 1,001 m . The range also includes many other Hewitts—peaks of over 2,000 ft . The mountains, part of the Armorican Highlands, are of glacial-carved Devonian sandstone and are on the Iveragh Peninsula near the Lakes of Killarney.

The name of the range dates to the 18th century. It is derived from the family or clan name Mac Giolla Mochuda who are a sept of the O'Sullivan's. The clan chief, McGillycuddy of the Reeks, owned land in this part of Munster for a long time prior, and continued to do so until the end of the 20th century. The word reek is a Hiberno-English version of the English word rick, meaning a stack.