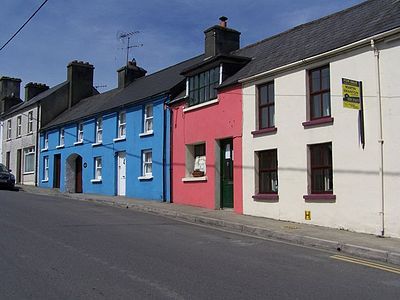 Ballydehob is a coastal village in the southwest of County Cork, Ireland, located on the N71 national secondary road.

At the dawn of the Bronze Age , copper was mined on Mount Gabriel, just west of the village. About the same time stone circles, wedge and boulder tombs were constructed in the area. The Celts arrived at some later time and in the early historic period various clans fought for dominance, until the eventual emergence of the McCarthys and O'Mahonys as the rulers of the region. A string of castles were built along the coastline. Kilcoe Castle was the McCarthy's most westerly stronghold and their only coastal foothold; it was probably West Cork's best preserved castle, and has been extensively renovated and rebuilt by its actor owner Jeremy Irons.