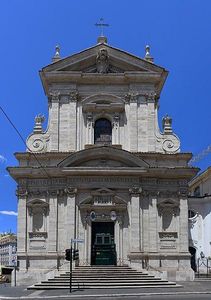 Santa Maria della Vittoria is a Catholic titular church dedicated to the Virgin Mary located in Rome, Italy. The church is known for the masterpiece of Gian Lorenzo Bernini in the Cornaro Chapel, the Ecstasy of Saint Teresa. The church is in the Rione Sallustiano, on number 98 via XX Settembre, where this street intersects with Largo Santa Susanna. It stands to the side of the Fontana dell'Acqua Felice. The church mirrors the Church of Santa Susanna across the Largo. It is about two blocks northwest of Piazza della Repubblica and Teatro dell'Opera metro stop.

The land for the church was purchased on April 20th in 1607, and built from 1608-1620, as a chapel dedicated to Saint Paul for the Discalced Carmelites. After the Catholic victory at the battle of White Mountain in 1620, which reversed the Reformation in Bohemia, the church was rededicated to the Virgin Mary. Turkish standards captured at the 1683 siege of Vienna hang in the church, adding to the theme of the Virgin helping to lead Catholic armies to victory.