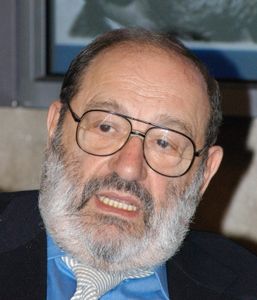 For the 700th birthday of the Cathedral of Florence, Santa Maria del Fiore, Umberto Eco was invited to execute the experiment of Foucault's Pendulum. Umberto Eco is the well known author of the book (and movie) the Name of the Rose and Foucault's Pendulum. A gigantic pendulum was attached to the even more gigantic dome of the cathedral. Foucault's theory and the experiment confirmed that the Earth is still rotating.
The Dome is also the link towards Leonardo Da Vinci. This dome is built by Filippo Brunelleschi. But only later on, the dome got a metal sphere on the top. It was Leonardo Da Vinci as a student, who helped to put the metal sphere on the top. During that time, and for that task, Leonardo studied closely the design of the machines Brunelleschi built. He would use that later on, for the many designs he made for his own machines.
The Duomo was also frequently visited by another scientific giant: Galileo Galilei, known from his studies of the pendulum, his astronomic observations and of his theory of the Earth rotating the Sun. His colleague Giordano Bruno lost his life trying to convince the Church of this theory. Luckily for Galileo Galilei, he got only banned from Florence for stating this. He got buried near to this cathedral, in the Basilica di Santa Croce di Firenze.