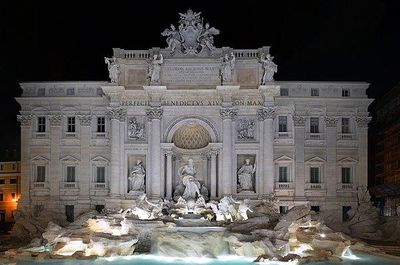 The Trevi Fountain is a fountain in the Trevi district in Rome, Italy, designed by Italian architect Nicola Salvi and completed by Giuseppe Pannini and several others. Standing 26.3 metres high and 49.15 metres wide, it is the largest Baroque fountain in the city and one of the most famous fountains in the world. The fountain has appeared in several notable films, including Roman Holiday, Federico Fellini's La Dolce Vita, the eponymous Three Coins in the Fountain, The Lizzie McGuire Movie, and Sabrina Goes to Rome.
The fountain at the junction of three roads marks the terminal point of the "modern" Acqua Vergine, the revived Aqua Virgo, one of the aqueducts that supplied water to ancient Rome. In 19 BC, supposedly with the help of a virgin, Roman technicians located a source of pure water some 13 km from the city. However, the eventual indirect route of the aqueduct made its length some 22 km . This Aqua Virgo led the water into the Baths of Agrippa. It served Rome for more than 400 years.