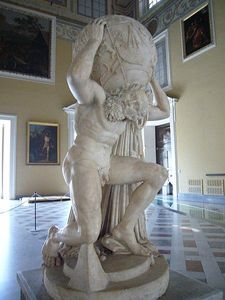 The Farnese Atlas is a 2nd-century AD Roman marble sculpture of Atlas holding up a celestial globe. Probably a copy of an earlier work of the Hellenistic period, it is the oldest extant statue of Atlas, a Titan of Greek mythology who is represented in earlier Greek vase painting, and the oldest known representation of the celestial spheres and the classical constellations. The sculpture is at the National Archaeological Museum of Naples, in Italy.

The statue is dated around AD 150, during the Roman Empire and after the composition of the Almagest by Claudius Ptolemy, but the celestial globe has long been presumed to represent constellations mapped in earlier Hellenistic astrology, particularly in the work of Hipparchus in the 2nd century BC.