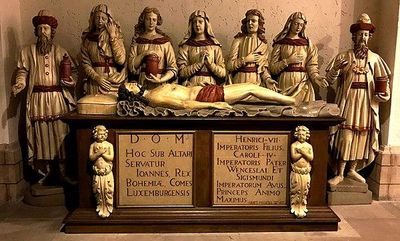 Notre-Dame Cathedral is the Roman Catholic Cathedral of Luxembourg City, in southern Luxembourg. It was originally a Jesuit church, and its cornerstone was laid in 1613. It is the only cathedral in Luxembourg.
The church is a noteworthy example of late gothic architecture; however, it also has many Renaissance elements and adornments. At the end of the 18th century, the church received the miraculous image of the Maria Consolatrix Afflictorum, the patron saint of both the city and the nation.