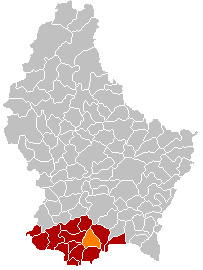 Bettembourg is a commune and town in southern Luxembourg. It is part of the canton of Esch-sur-Alzette, which is part of the district of Luxembourg.
As of 2005, the town of Bettembourg, which lies in the east of the commune, has a population of 7,157. Other towns within the commune include Abweiler, Fennange, Huncherange, and Noertzange.