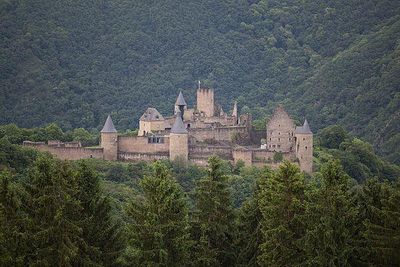 Bourscheid Castle is located near the village of Bourscheid in north-eastern Luxembourg. The medieval castle stands on a site with archeological evidence of structures dating back to Roman times. Standing majestically some 150 metres above the River Sûre, it is enclosed by a circular wall with 11 watchtowers.
Although first mentioned in records from 1095, the castle appears to have been built around the year 1000 on earlier foundations. It was extended on several occasions: the outer wall dates from 1350, the Stolzembourg house from 1384 and the courtyard from 1477. Behind the gateway from the end of the 15th century, a ditch protected by four towers barred access to the upper and lower castles. The southern and eastern towers are from 1498 and the artillery bastions were built in the 16th century.