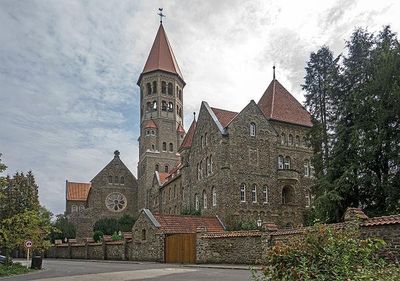 The Abbey of St. Maurice and St. Maurus of Clervaux , founded in 1890, is a Benedictine monastery in Clervaux, Luxembourg. It is a member of the Solesmes Congregation in the Benedictine Confederation.
The abbey was founded by the Benedictine monks of the Abbey of St. Maur of Glanfeuil in France, itself founded in the 7th century. After its suppression under the French Revolution, that abbey remained vacant until it was re-established in 1890 under Louis-Charles Couturier, O.S.B., Abbot of Solesmes Abbey. In 1901, however, the monks were compelled to leave France due to the anti-clerical laws of the Third French Republic. After finding refuge in Baronville, Belgium , the monks began to search for a permanent home. After various inquires failed, they finally settled upon Clervaux. In 1908, a vote was taken by the monastic chapter, which made the decision to dissolve the existing monastery, and to found a new monastery there, dedicated to St. Maurice. Construction on the new abbey, designed in the Neo-Romanesque style by the architect, J.F. Klomp, a Dutchman based in Germany, was begun in 1909. The monks arrived in August 1910 to begin living in the new site. In 1926, the name of St. Maur was added to that of St. Maurice.