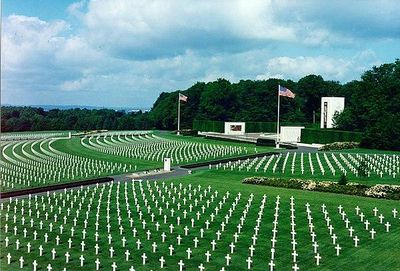 Luxembourg American Cemetery and Memorial is a Second World War American military war grave cemetery, located in Hamm, Luxembourg City, Luxembourg. The cemetery, containing 5,073 American war dead, covers 50.5 acres and was dedicated in 1960. It is administered by the American Battle Monuments Commission.
The cemetery was established on 29 December 1944 by the 609th Quartermaster Company of the U.S. Third Army while Allied Forces were containing the German Ardennes offensive in the winter of 1944/1945. General George S. Patton used the city of Luxembourg as headquarters.