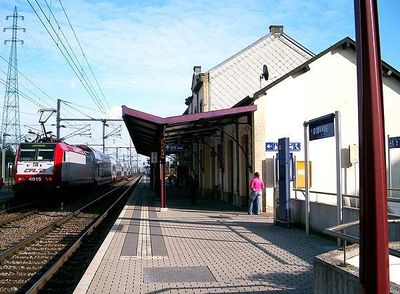 Rodange railway station is a railway station serving Rodange, in the commune of Pétange, in south-western Luxembourg. It is operated by Chemins de Fer Luxembourgeois, the state-owned railway company, and served by both CFL trains and those of the Belgian state operator, SNCB.
The station is situated on Line 70, which connects the south-west of the country to Luxembourg City; at Rodange, the line branches, and connects to both the Belgian town of Athus and the French town of Longuyon . It is also located on Line 80, and is the only Luxembourgian station served by that line.