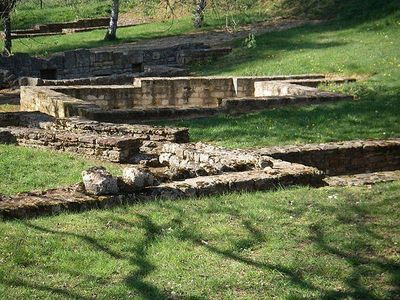 Titelberg is the site of a large Celtic settlement or oppidum in the extreme south west of Luxembourg. In the 1st century BC, this thriving community was probably the capital of the Treveri people. The site thus provides telling evidence of urban civilization in what is now Luxembourg long before the Roman conquest.
The site lies some 3 km to the south west of Pétange and 3 km north west of Differdange on a bare plateau some 390 m above sea level. It is surrounded by steep forested slopes which run down to the Chiers, a hundred meters below. It can be reached from Niedercorn by taking the road to Roudenhaff and making a right turn towards the Fond de Gras.