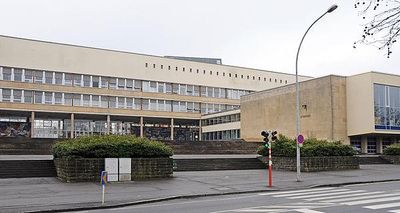 The Athénée de Luxembourg , is a high school situated in Luxembourg City, in southern Luxembourg. Throughout the school's history of more than 400 years, the name was changed repeatedly. It's nowadays commonly called Stater Kolléisch or De Kolléisch, and is the nation's oldest school still in existence.

On 15 May 1585, Pope Sixtus V signed a Papal bull granting the Jesuit Order the right to establish a school in Luxembourg. The school was eventually founded in 1603 by the Jesuit Order, and was located next to the Notre Dame Cathedral, in the Ville Haute quarter. It was modeled after the Jesuit school in Trier. The school flourished and in 1684 it was expanded. After the Suppression of the Society of Jesus by Pope Clement XIV in 1773, the school was renamed as the Collège royal, and was put under auspices of the clergy. Furthermore, the school's curriculum was reformed and expanded.