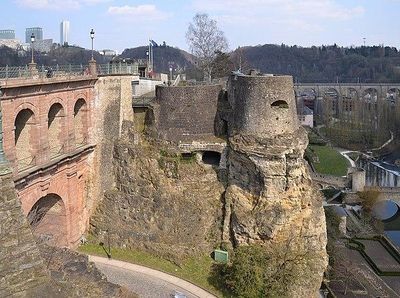 The Fortress of Luxembourg refers to the former fortifications of Luxembourg City, the capital of the Grand Duchy of Luxembourg, which were mostly dismantled in 1867. The fortress was of great strategic importance for the control of the Left Bank of the Rhine, the Low Countries, and the border area between France and Germany.
The fortifications were built gradually over nine centuries, from soon after the city's foundation in the tenth century until 1867. By the end of the Renaissance, Luxembourg was already one of Europe's strongest fortresses, but it was the period of great construction in the 17th and 18th centuries that gave it its fearsome reputation. Due to its strategic location, it became caught up in Europe-wide conflicts between the major powers such as the Habsburg–Valois Wars, the War of the Reunions or the French Revolutionary Wars, and underwent changes in ownership, sieges, and major alterations, as each new occupier—the Burgundians, French, Austrian and Spanish Hapsburgs, and Prussians—made their own improvements and additions.