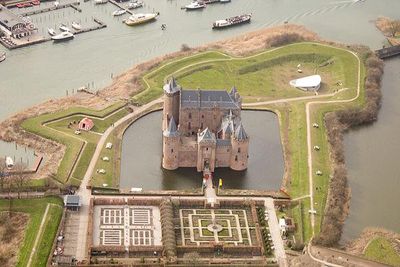 Muiden Castle is a castle in the Netherlands, located at the mouth of the Vecht river, some 15 kilometers southeast of Amsterdam, in Muiden, where it flows into what used to be the Zuiderzee. It's one of the better known castles in the Netherlands and has been featured in many television shows set in the Middle Ages.
The history of Muiden Castle begins with Count Floris V who built a stone castle at the mouth of the river back in 1280, when he gained command over an area that used to be part of the See of Utrecht. The Vecht river was the trade route to Utrecht, one of the most important trade towns of that age. The castle was used to enforce a toll on the traders. It is a relatively small castle, measuring 32 by 35 metres with brick walls well over 1.5 metres thick. A large moat surrounded the castle.