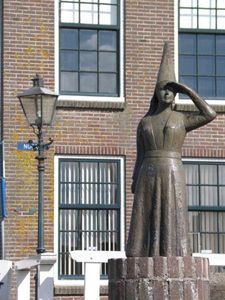 Stavoren, ]; West Frisian: Starum; previously Staveren) is a town in Friesland, Netherlands, on the coast of the IJsselmeer about 5 km south of Hindeloopen, in the municipality of Súdwest-Fryslân.

Stavoren had a population of 950 in January 2017. It is one of the stops on the Elfstedentocht , an ice skating contest which occurs when the winter temperatures provide safe conditions. A ferry for pedestrians and cyclists operates between Stavoren and Enkhuizen, with increased trips during summer months. The Friese Kustpad, a 131 kilometres long-distance trail to Lauwersoog, begins in Stavoren.