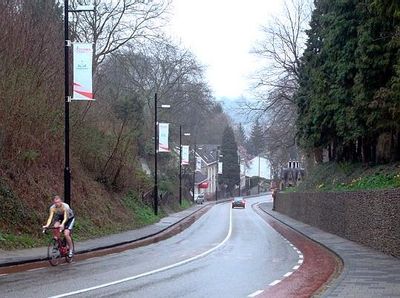 The Cauberg is a hill in Valkenburg aan de Geul, a town in the southern part of the Netherlands. The hill played an important role in the early development of tourism in Valkenburg. Today, several major tourist attractions are situated on or nearby Cauberg. The hill's fame is mainly due to the many cycling races and championships that were held here. The length of the climb is around 1200 m, with a maximum grade of 12%.

The first part of the word Cauberg may be derived from the Celtic word kadeir, meaning 'height' or 'hill'. Berg is a Germanic word meaning 'hill' or 'mount' as well. Perhaps the family names 'Cauberghs' and 'Van Caldenborgh' are related to Cauberg. Previously the name of the hill was also spelled 'Couberg'. Although the road via Cauberg formed the shortest connection between Valkenburg and Maastricht, in former ages most unmotorized traffic due to the steepness of the hill followed the longer but much more level route along the Geul river. The road was paved with cobblestones only in 1934; in 1969 the cobblestone surface was replaced by asphalt.