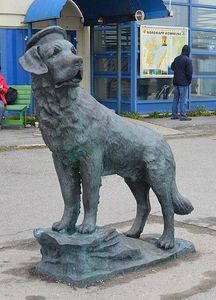 The Bamse statue is a statue in the Norwegian town of Honningsvåg in Nordkapp municipality. The statue commemorates the famous ship's dog Bamse, who was deployed on a ship in the Norwegian Navy during the Second World War.

The Bamse statue is in the harbor area of Honningsvåg. The statue shows the St. Bernard Bamse life-size and looking out. The front paws are slightly raised on a base. The statue was created by the sculptor Alan Herriot and was unveiled on June 19, 2009. Previously, on October 17, 2006, a statue of the same design was unveiled in Montrose, Scotland. Bamses ship Thorodd was stationed there longer. In the North Cape Museum there is a model of the ship and photos of Bamse. The ship model was unveiled the day before the statue was inaugurated in the museum that was in the immediate vicinity of the statue at the time. The statue was financed through private donations and with the support of the military and the port authorities. Sigurd Berg Hansen was the project manager for the erection of the monument.