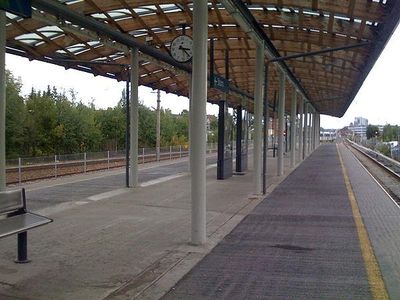 Storo is a rapid transit station on the Ring Line of the Oslo Metro, and a tram station on the Grünerløkka–Torshov Line of the Oslo Tramway. It is located at Storo in the Nordre Aker borough of Oslo, Norway. The tram station opened on 28 November 1902, and the rapid transit station on 20 August 2003. Metro lines 4 and 5 run to the station. The tram station serves lines 11, 12 and 18. The station is within walking distance of Grefsen Station on the Gjøvik Line. The station also functions as a bus hub, being located along Ring 3. Storo is a mixed commercial and residential area, and a shopping center is located just north of the subway station.

Storo opened as a tram station as the terminus of the Grünerløkka–Torshov Line on 28 November 1902. The line was extended northwards as the Kjelsås Line to Kjelsås on 25 September 1934, and south-eastwards as an extension of the Sinsen Line in 1939.