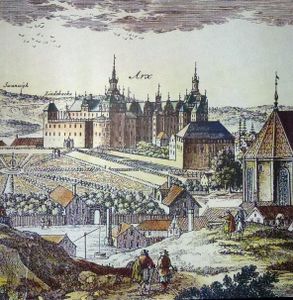 In Nyköping Queen Christina made a short halt at the castle where the Queen-Mother Maria Eleanora lived to say her mother good-bye. It was the last time the two women met each other: Maria Eleonora should die within a year. The relation between them was troubled, not in the least because of the dark years mother and child lived together in Nyköping after the dead of King Christina's father, King Gustaf Adolf. The castle should burn down together with the city in 1665. Afterwards parts of the building were reerected. From the original castle the gate-house (between the castle and the church right in front) is the best preserved. Nowadays the building is used as a historical museum. (Engraving 17th century, fragment.)