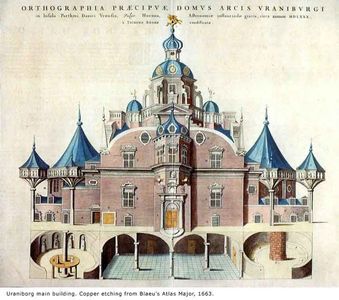 Uranienborg was an astronomical observatory designed by Tycho Brahe. It was built between 1576-1580.

Both Uraniborg and Stjerneborg were destroyed shortly after Tycho's death.
The building was dedicated to Urania, the Muse of Astronomy and named Uranienborg.

Shortly after construction it became clear that the tower-mounted instruments were too easily moved by wind, and Tycho set about constructing a more suitable observation site. The result was Stjerneborg.