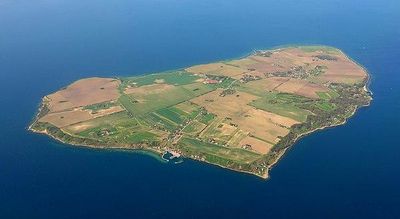 Ven is a small Swedish island in the Øresund strait, between Scania and Zealand . It is part of Landskrona Municipality, Skåne County. The island has 371 inhabitants and an area of 7.5 km2 . During the 1930s, the population was at its peak, with approximately 1,300 inhabitants. There are four villages on the island: Bäckviken, Tuna By, Norreborg and Kyrkbacken.

Unlike the relatively flat islands Amager and Saltholm, Ven rises from the Øresund with steep and dramatic coastlines. This makes the island easily visible from both Zealand and Scania, as well as from all ships that sail in and out of the Baltic Sea. Its southern coastline resembles the White Cliffs of Dover, Møns Klint and Cape Arkona, but owing to a higher degree of sand and lower of chalk, the 50-metre-high cliffs are more yellow than white. Almost the entire island consists of a flat agricultural landscape, but elevated like a plateau. Owing to the slightly higher altitude, the climate on the island in general is similar to that of the lower terrain coastal areas around Øresund.