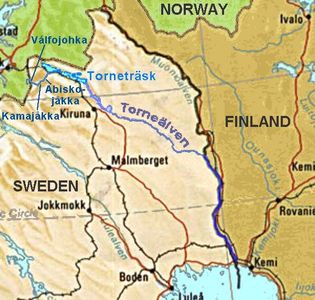 The Torne, also known as the Tornio , is a river in northern Sweden and Finland. For approximately half of its length it defines the border between these two countries. It rises at Lake Torne near the border with Norway and flows generally southeast for a distance of 522 kilometres into the Gulf of Bothnia. It is the largest river in Norrbotten both by length and by watershed area.