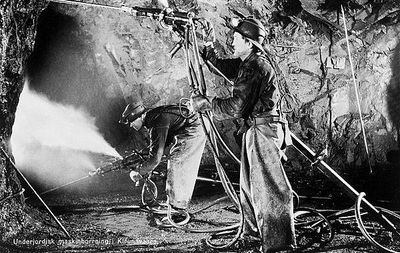 The Kiruna mine is the largest and most modern underground iron ore mine in the world. The mine is located in Kiruna in Norrbotten County, Lapland, Sweden. The mine is owned by Luossavaara-Kiirunavaara AB , a large Swedish mining company. In 2018 the mine produced 26.9 million tonnes of iron ore. The Kiruna mine has an ore body which is 4 km long, 80 metres to 120 metres thick and reaching a depth of up to 2 km . Since mining began at the site in 1898, the mine has produced over 950 million tonnes of ore.
In 2004, it was decided that the present centre of the city would need to be relocated to accommodate mining-related subsidence. The relocation would be made gradually over decades.