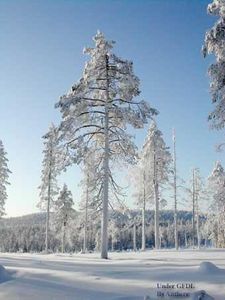 Sápmi is the cultural region traditionally inhabited by the Sámi people. Sápmi is located in Northern Europe and includes the northern parts of Fennoscandia. The region stretches over four countries: Norway, Sweden, Finland, and Russia. On the north it is bounded by the Barents Sea, on the west by the Norwegian Sea and on the east by the White Sea.
The area is historically referred to as Lapland () in English, although the term "Lapp" for its inhabitants is now often discouraged.
Sápmi refers to the areas where the Sámi people have traditionally lived, but overlaps with other regions and definitions, including regions where Scandinavian settlement predates Sámi settlement and where the Sámi are only a tiny minority, e.g. Trøndelag. In practice most of the Sámi population is largely concentrated in a few traditional areas in the northernmost part of Sápmi, such as Kautokeino and Karasjok, with the exception of those who have left for the larger cities. The Sami people are estimated to only make up around 2.5% to 5% of the total population in the Sápmi area. No political organization advocates secession, although several groups desire more territorial autonomy and/or more self-determination for the region's indigenous population.

Sápmi refers to both the Sami land and the Sami people. In fact, the word "Sámi" is only the accusative-genitive form of the noun "Sápmi"—making the name's meaning "people of Sápmi." The origin of the word is speculated to be related to the Baltic word *žēmē that simply means "land". Also "Häme", the Finnish name for Tavastia, a historical province of Finland, is thought to have the same origin, and the same word is at least speculated to be the origin of "Suomi", the Finnish name for Finland.