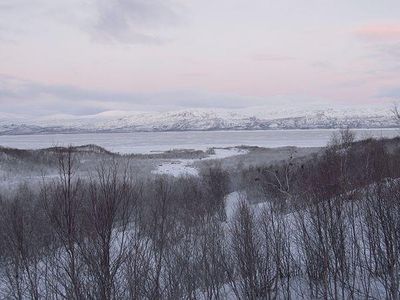 Torneträsk or Torne träsk is a lake in Kiruna Municipality, Lapland, Norrbotten County in Sweden, in the Scandinavian mountain range. Träsk is the local word for lake . It is the sixth largest lake in Sweden, with a total area of 330 square kilometres and a length of 70 kilometres . The lake drains to the south-east through Torne älv. South-west of the lake lie the Abisko National Park and the UNESCO World Heritage Site Laponian area.

Torneträsk originated from the remnant of a glacier, which has given the lake its depth of 168 metres , making it the second deepest lake in Sweden. It is usually ice-covered from December through June, with variations dependent on temperature variations.