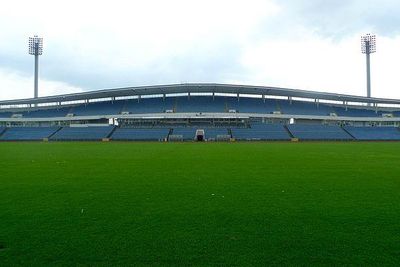 Malmö Stadion, often known simply as Stadion before the construction of the new Stadion between 2007 and 2009, is a multi-purpose stadium in Malmö, Sweden. As of 2015, it is the home of association football club IFK Malmö, presently of Division 2, and athletics club MAI. The stadium served as the home ground for Malmö FF, an association football team in Sweden's top flight, Allsvenskan, from its opening in 1958 until 2009, when the club moved to the newly constructed Stadion, built beside Malmö Stadion, in 2009. Malmö FF still use the stadium for training purposes and youth matches. Besides being used for sports, the stadium has also hosted various concerts and other events. The ground's record attendance, 30,953, was set in the very first match played at the ground, a 1958 FIFA World Cup match between Argentina and West Germany.
Malmö Stadion was originally built for the 1958 FIFA World Cup, during which it was the venue for four matches. It replaced Malmö IP as Malmö's main sports stadium, where IFK Malmö, MAI and Malmö FF had been based since the early 20th century. It also hosted three matches during the 1992 UEFA European Football Championship. The stadium today holds 26,500 spectators when in its sporting configuration, with 14,000 fans seated and 12,500 standing. For concerts, the ground can hold up to 40,000 people depending on the location of the stage. On 2 February 2015 Malmö Stad took the decision to approve the demolition of the stadium for redevelopment of the area. Malmö Stad has previously decided that a new public swimming arena is to be built on the site in the near future. As of February 2015 it is still not known when the demolition process will begin.