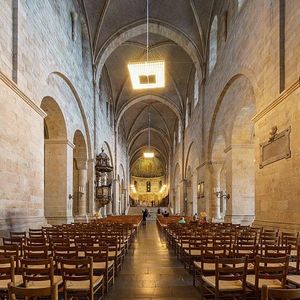 Lund Cathedral is a cathedral of the Lutheran Church of Sweden in Lund, Scania, Sweden. It is the seat of the Bishop of Lund and the main church of the Diocese of Lund. It was built as the Catholic cathedral of the archiepiscopal see of all the Nordic countries, dedicated to Saint Lawrence. It is one of the oldest stone buildings still in use in Sweden.

Lund Cathedral has been called "the most powerful representative of Romanesque architecture in the Nordic countries". At the time of its construction, Lund and the cathedral belonged to Denmark. The main altar was consecrated in 1145 and the cathedral was by that time largely finished; the western towers were built somewhat later. Its architecture show clear influences from contemporary north Italian architecture, conveyed via the Rhine Valley. The earliest architect was named Donatus, though his precise role in the construction of the cathedral is difficult to determine. The new cathedral was richly decorated with stone sculpture, including two unusual statues in the crypt traditionally called "The giant Finn and his wife" about which a local legend has developed. The cathedral was severely damaged in a fire in 1234, and major restoration works were carried out in the early 16th century under the leadership of Adam van Düren. Following the Reformation, the cathedral suffered from lost income and dilapidation. In 1658, the city of Lund and the cathedral became a part of Sweden following the Treaty of Roskilde. Lund Cathedral was the site of the ceremony founding Lund University in 1668. Repairs were made during the 18th century but in 1832 a complete restoration of the cathedral was recommended. Subsequently, much of the cathedral was restored and rebuilt during most of the 19th century. The work was first led by Carl Georg Brunius and later by architect Helgo Zettervall and not entirely finished until 1893. The changes implemented during the 19th century were extensive; among other things, Zettervall had the entire western part, including the towers, demolished and rebuilt to his own designs.