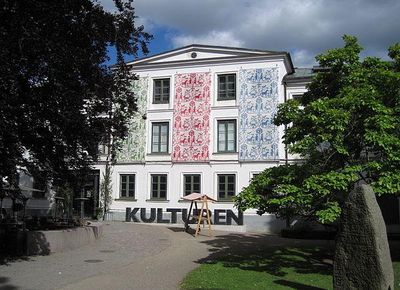 Kulturen is an open air museum in Lund in Lund, Sweden. Occupying two blocks in central Lund, Kulturen is Sweden's and the world's second oldest open-air museum after Skansen in Stockholm. It contains historic buildings, dating from the Middle Ages to the 1930s, set in gardens or cobblestone streets. The complete name of the museum is Kulturhistoriska föreningen för södra Sverige.

In the late 19th century, Swedish society was characterised by National Romantic visions of an idyllic rural community. As more and more people migrated to cities, concern grew that traditions, ways of life and crafts would be lost. The result was the emergence of a movement to safeguard knowledge and artefacts. It was against this backdrop that the Association for the Cultural History of Southern Sweden , was established in 1882. The museum "Kulturhistoriska museet", founded among others by local historian Georg Karlin opened on 21 October 1882 in Kungshuset. Karlin was a contemporary of Arthur Hazelius who had opened the open-air museum Skansen just a year before. Skansen had become the model for other open-air museums in Northern Europe.