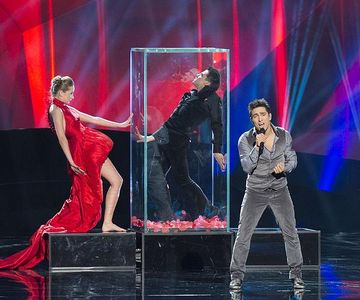 The Eurovision Song Contest 2013 was the 58th edition of the annual Eurovision Song Contest. It took place in Malmö, Sweden, following Loreen's win at the 2012 contest in Baku, Azerbaijan with the song "Euphoria". It was the fifth time Sweden had hosted the contest, having previously done so in 1975, 1985, 1992 and 2000.
Organised by the European Broadcasting Union and host broadcaster Sveriges Television , the contest was held at Malmö Arena and consisted of two semi-finals on 14 and 16 May, and the final on 18 May 2013. The three live shows were hosted by Petra Mede, while Eric Saade hosted the green room.

Thirty-nine countries participated, with Armenia returning after their one-year absence. Bosnia and Herzegovina, Portugal, Slovakia and Turkey all withdrew from the contest for various reasons.