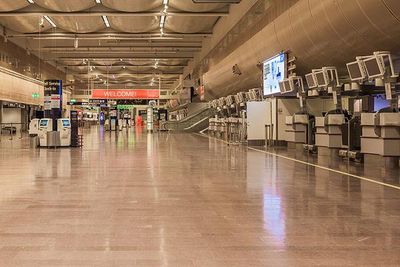 Stockholm Arlanda Airport is an international airport located in the Sigtuna Municipality of Sweden, near the town of Märsta, 37 kilometres north of Stockholm and nearly 40 kilometres south-east of Uppsala. The airport is located within Stockholm County and the province of Uppland. It is the largest airport in Sweden and the third-largest airport in the Nordic countries. The airport is the major gateway to international air travel for large parts of Sweden. Arlanda Airport was used by close to 27 million passengers in 2017, with 21.2 million international passengers and 5.5 million domestic.
Stockholm Arlanda Airport is the larger of Stockholm's two airports. The other, Stockholm–Bromma, is located north-west of the city's centre but can be used only by a small number of smaller aircraft. The smaller airports Stockholm-Skavsta and Stockholm-Västerås are both located around 100 kilometres away from the Swedish capital. Stockholm Arlanda serves as a major hub for Scandinavian Airlines and Norwegian Air Shuttle.