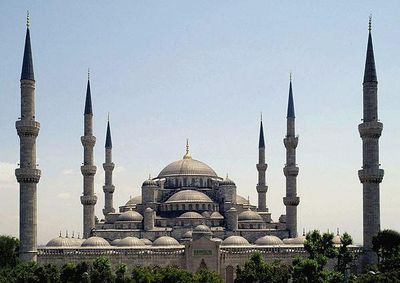 The Sultan Ahmed Mosque is a historic mosque located in Istanbul, Turkey. A popular tourist site, the Sultan Ahmed Mosque continues to function as a mosque today; men still kneel in prayer on the mosque's lush red carpet after the call to prayer. The Blue Mosque, as it is popularly known, was constructed between 1609 and 1616 during the rule of Ahmed I. Its Külliye contains Ahmed's tomb, a madrasah and a hospice. Hand-painted blue tiles adorn the mosque’s interior walls, and at night the mosque is bathed in blue as lights frame the mosque’s five main domes, six minarets and eight secondary domes. It sits next to the Hagia Sophia, another popular tourist site.

After the Peace of Zsitvatorok and the crushing loss in the 1603–18 war with Persia, Sultan Ahmet I, decided to build a large mosque in Istanbul to reassert Ottoman power. It would be the first imperial mosque for more than forty years. While his predecessors had paid for their mosques with the spoils of war, Ahmet I procured funds from the Treasury, because he had not gained remarkable victories. The construction was started in 1609 and not completed until 1617.