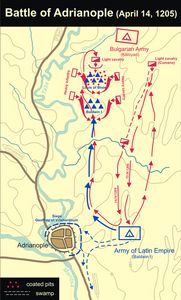 The Battle of Adrianople occurred around Adrianople on April 14, 1205 between Bulgarians and Cumans under Tsar Kaloyan of Bulgaria, and Crusaders under Baldwin I, who only months before had been crowned Emperor of Constantinople, allied with Venetians under Doge Enrico Dandolo. It was won by the Bulgarians, after a successful ambush.
Due to the financial difficulties of the Crusaders, who could not repay the leases on Venetian shipping, the Doge of Venice, Enrico Dandolo, suggested that the armies of the Fourth Crusade deviate from their intended goal of Jerusalem. Instead of continuing onwards, on the 12–13 April, year 1204 AD, the capital of the Byzantine Empire, Constantinople, was captured and sacked. Numerous cultural treasures were either destroyed or stolen, such as sacred texts, relics, manuscripts, icons, archives, works of art, as well as much wealth. The heart of Orthodox Christianity suffered irreparable damage, both from the sack, and the fires caused by the Crusader siege, which torched more than 2/3 of the city. The capture of Constantinople created the Latin Empire, which initially only controlled the environs of Constantinople and the province of Thrace, but eventually expanded into Bithynia, Thessaly and central and southern Greece.