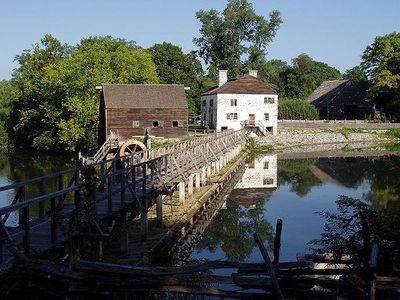 Sleepy Hollow is a village in the town of Mount Pleasant, in Westchester County, New York. The village is located on the east bank of the Hudson River, about 30 miles north of New York City, and is served by the Philipse Manor stop on the Metro-North Hudson Line. To the south of Sleepy Hollow is the village of Tarrytown, and to the north and east are unincorporated parts of Mount Pleasant. The population of the village at the 2010 census was 9,870.
Originally incorporated as North Tarrytown in the late 19th century, in 1996 the village officially adopted the traditional name for the area. The village is known internationally through "The Legend of Sleepy Hollow", an 1820 short story about the local area and its infamous specter, the Headless Horseman, written by Washington Irving, who lived in Tarrytown and is buried in Sleepy Hollow Cemetery. Owing to this story, as well as the village's roots in early American history and folklore, Sleepy Hollow is considered by some to be one of the "most haunted places in the world".