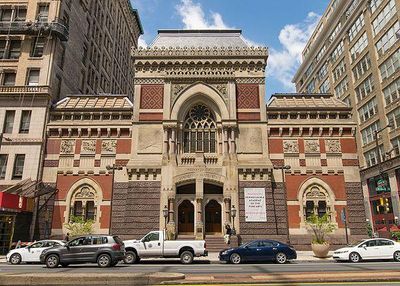 The Pennsylvania Academy of the Fine Arts is a museum and art school in Philadelphia, Pennsylvania. It was founded in 1805 and is the first and oldest art museum and art school in the United States. The academy's museum is internationally known for its collections of 19th- and 20th-century American paintings, sculptures, and works on paper. Its archives house important materials for the study of American art history, museums, and art training. Pennsylvania Academy of the Fine Arts won the 2020 Webby Award for School / University in the category Web.
The Pennsylvania Academy of the Fine Arts was founded in 1805 by painter and scientist Charles Willson Peale, sculptor William Rush, and other artists and business leaders. The growth of the Academy of Fine Arts was slow. For many years it held its exhibitions in an 1806 building, designed by John Dorsey with pillars of the Ionic order. It stood on the site of the later American Theater at Chestnut and 10th streets. The academy opened as a museum in 1807 and held its first exhibition in 1811, where more than 500 paintings and statues were displayed. The first school classes held in the building were with the Society of Artists in 1810.