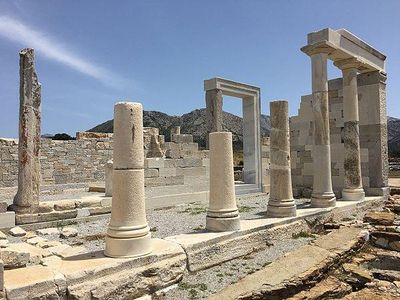 The Temple of Sangri is a Late Archaic Greek temple on the Cycladic island of Naxos in the area of Gyroulas, about 1.5 km south of Ano Sangri. The temple was built around 530 BC and is one of the earliest Ionic temples. It was built completely from Naxian marble.

The temple was built around 530 BC. Based on the finds, the sanctuary was probably dedicated to Demeter or perhaps Kore. For this reason and because of its unusual shape, the temple is often referred to as a telesterion. There are also indications of a cult to Apollo on the site. If still in use by the 4th century AD, the temple would have been closed during the persecution of pagans under the Christian emperors. In the 6th century AD, the temple was largely demolished and a three-naved Christian basilica was built from the same stone on the same site.