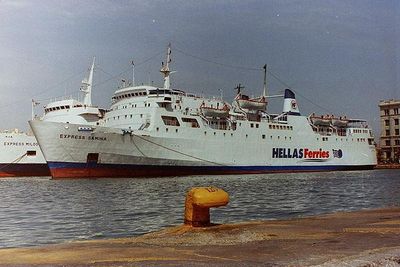 MS Express Samina was a French-built RoPax ferry that collided with a rock off the coast of Paros island in the central Aegean Sea on 26 September 2000. The accident resulted in 81 deaths and the loss of the ship. The cause of the accident was crew negligence, for which several members were found criminally liable.

The ship was built as MS Corse in 1966 at Chantiers de l'Atlantique, St Nazaire, France for Compagnie Générale Transatlantique, along with her sister ship MS Comte De Nice. In 1969, she was transferred to Compagnie Générale Transméditerranéenne. After six years of service, the company changed its name again, to SNCM, to which she was transferred. She sailed from France for the last time in 1982, as she was sold to a Greek company, Stability Maritime, to operate their Italy–Greece–Israel route under her new name MS Golden Vergina. In 1988, she was sold to the Agapitos Bros for service in the Aegean sea under Agapitos Lines, without a name change. She was then sold in 1999 to Minoan Flying Dolphins, again for service in the Aegean, when she was renamed Express Samina.