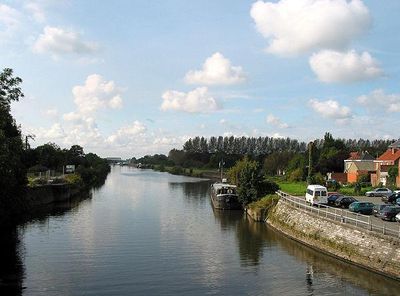 Comines-Warneton is a Belgian city and municipality in the Walloon province of Hainaut. On January 1, 2006, it had a total population of 17,562. Its total area is 61.09 km2 which gives a population density of 287 inhabitants per square kilometre . The name "Comines" is believed to have a Celtic, or Gaulish, origin. Comines-Warneton is a municipality with language facilities for Dutch-speakers.

The municipality of Comines-Warneton includes the traditional villages of Comines , Comines-ten-Brielen, Houthem, Warneton , Bas-Warneton , Ploegsteert and Le Bizet. They were all transferred in 1963 from the arrondissement of Ypres in the Dutch-speaking province of West Flanders to the newly created arrondissement of Mouscron in French-speaking Hainaut. The five municipalities were merged into a single Comines-Warneton municipality in 1977. Since then, the municipality forms an exclave of both Hainaut and Wallonia, being surrounded by the Flemish province of West-Flanders and the French department of Nord and not connected to the rest of the French-speaking area of Belgium.