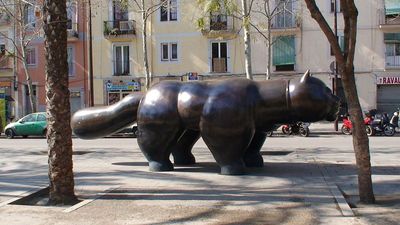 Raval is often referred to as el Barri Xinès, or China town. It acquired this name not due to there being residents of Chinese origin, but because it was how a Chinese city was imagined to be. Due to its previous reputation as a dangerous area, the local government has put a lot of time and work into the neighborhood, including the creation of a walkway to the sea, the Rambla del Raval and new building development, including the new Filmoteca de Catalunya. It has become one of the most dynamic areas of the city. Many smaller ethnic restaurants may be found in Raval and several fashionable restaurants and cafés have been opening up in recent years. The Museu d'Art Contemporani de Barcelona (Contemporary Art Museum of Barcelona) can also be found in this neighborhood.