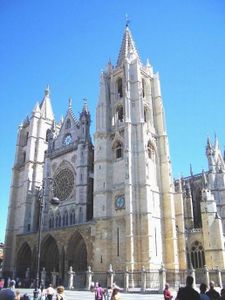 León is famous for its Gothic León Cathedral and the Real Colegiata de San Isidoro (which holds the Royal Pantheon, a mausoleum in which medieval Kingdom of León''s royal family were buried, and also has one of the world''s best collections of Romanesque paintings). Here you can also find Casa de Botines, an early work of Spanish architect Antoni Gaudí.

León is also known for its "fiestas", like Easter. Leonese processions are declared to be of International Interest and, on those days, many people from all over the world visit León to see and participate in its traditions.