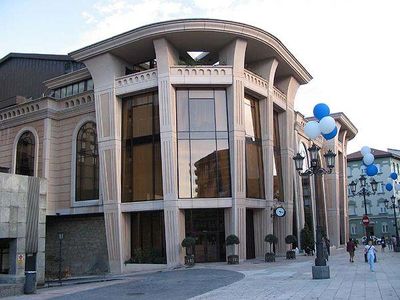 Oviedo is the capital city of the Principality of Asturias in northern Spain and the administrative and commercial centre of the region. It is also the name of the municipality that contains the city. Oviedo is located approximately 24 km southwest of Gijón and 23 km south of Avilés, both of which lie on the shoreline of the Bay of Biscay. Oviedo's proximity to the ocean of less than 30 kilometres in combination with its elevated position with areas of the city more than 300 metres above sea level causes the city to have a maritime climate, in spite of it not being located on the shoreline itself.

The Kingdom of Asturias began in 720, with the Visigothic aristocrat Pelagius's revolt against the Muslims who at the time were occupying most of the Iberian Peninsula. The Moorish invasion that began in 711 had taken control of most of the peninsula, until the revolt in the northern mountains by Pelagius. The resulting Kingdom of Asturias, located in an economically poor region of Iberia, was largely ignored by the Muslims. In 720, the area where Oviedo is now located was still uninhabited.