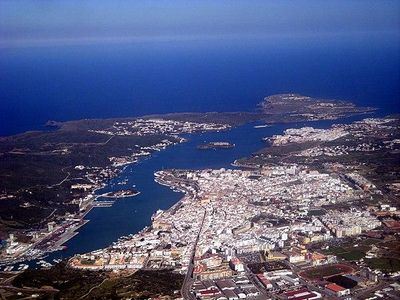 Maó-Mahón, sometimes written in English as Mahon () is a municipality, the capital city of the island of Menorca, and seat of the Island Council of Menorca. The city is located on the eastern coast of the island, which is part of the autonomous community of the Balearic Islands, Spain. Maó-Mahón has one of the largest natural harbours in the world: 5 km long and up to 900 metres wide. The water is deep but it remains mostly clear due to it being slightly enclosed. It is also said to be the birthplace of mayonnaise.
The name's origin is attributed to the Carthaginian general Mago Barca, brother to Hannibal, who is thought to have taken refuge there in 205 BC. After the fall of the Western Roman Empire, it became part of the Eastern Empire; it suffered raids from Vikings and Arabs, until the Islamic Caliphate of Córdoba conquered it in 903.