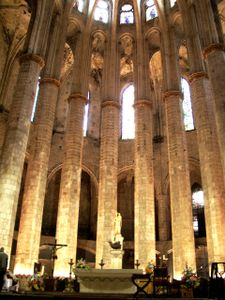 It was at the altar of Santa Maria del Mar that the (fictive) character of Arnau (in the book Cathedral of the Sea by Ildefonso Falcones) had a discussion with his wife Eleonor about fulfilingling his conjugal duties. He was forced by the king to marry Eleonor. He would never 'lie with her'.
This discussion was used in the confiction of Arnau by the Inquisition later on in the book.

The author Falcones, writes this about the cathedral in his end notes: "Santa Maria de la Mar is without doubt one of th emost beautiful churches to be found anywhere. It may lack the monumentality of others built at the same time or later, bu tits interior is filled with teh spirit with which Berenguer de Montagut (architect) sought to infuse it: the people's church, built by the people of Barcelona for Barcelona, is like an airy Catalan farmhouse. It is austere, protected and protecting, and the light of the Mediterranean sets it apart from any other church in the world".