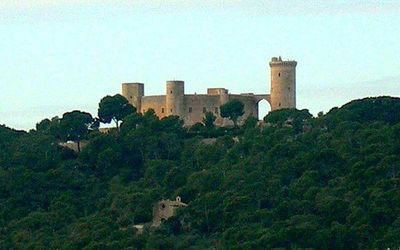 Bellver Castle is a Gothic-style castle on a hill 3 km to the west of the center of Palma on the Island of Majorca, Balearic Islands, Spain. It was built in the 14th century for King James II of Majorca, and is one of the few circular castles in Europe. First serving as the residence of the Kings of Majorca, and afterward long used as a military prison throughout the 18th to mid-20th century, it is now under civilian control, being one of the main tourist attractions of the island, as well as the seat for the city's History Museum.
The castle's plan, a circular floor with round towers attached to it, seems to have been inspired by the upper complex of the Herodion, a 15 BCE hilltop palace in the West Bank, that was also circular and had a large principal tower and three minor towers as well. They are attached while the principal one is coupled to the complex by a high bridge over the surrounding moat.