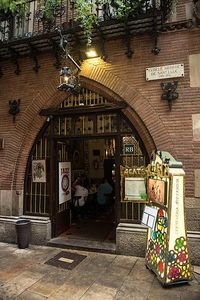 Els Quatre Gats is a café in Barcelona, Catalonia, Spain that famously became a popular meeting place for famous artists throughout the modernist period in Catalonia. The café opened on June 12, 1897 in the famous Casa Martí, and served as a hostel, bar and cabaret until it eventually became a central meeting point for Barcelona’s most prominent modernist figures, such as Pablo Picasso and Ramon Casas I Carbó. The bar closed due to financial difficulties in June 1903, but was reopened and eventually restored to its original condition in 1989.
Pe Romeu had the idea to open Els Quatre Gats, drawing inspiration from a French café called Le Chat Noir, where he had previously worked. Le Chat Noir translates to “The Black Cat” in English, but the name is a little different in Catalan. Els Quatre Gats means “The Four Cats,” which is derived from a Catalan expression which means “only a few people.” The phrase is usually used to describe people who are a bit strange, or perceived as outsiders. Romeu was taken with this Parisian café, and decided to model the décor of his café after it. Romeu was financially supported by three of his friends, Ramon Casa i Carbó, Santiago Rusiñol, and Miguel Utrillo, three major modernist Spanish artists of the time. Casas even painted something specifically for the interior of the café, his famous painting called, Ramon Casas and Pere Romeu on a Tandem. The painting depicts both Casas and Romeu riding on a bike together with the Barcelona skyline visible in the background. On the right side of the painting, there is an inscription, which reads, “To ride a bike, you can’t go with your back straight.” This quote reflects the attitude of the founders that in order to make progress and make something great, you must break tradition. As the original is in a museum, a copy of the painting now hangs in the café.